This Sanitary Sewer System uses a network of pipes to collect sewage from homes and businesses and channels wastewater into the Ross Township collector system to the trunk lines and then to ALCOSAN. These conduits are fully enclosed and buried underground. The sanitary sewer user fee is calculated from the residents’ water usage. The system’s primary purpose is to protect public health.

This Stormwater System collects rainwater runoff and directs it into local streams without putting it through the sewage treatment plant. Parts of this system are open to the surface and no one is charged for its use. The primary role of the stormwater system is to protect property against flooding and water damage.

Both the Sanitary and Stormwater Sewer Systems use a combination of private and public components. The design and construction standards are specified in the Township’s Code of Ordinances.

In 2008, Ross Township updated its Stormwater Management Ordinance, and it implemented a plan to deal with flooding, infiltration/inflow problems, detention, and related stormwater drainage concerns. That Stormwater Management Plan targets the accelerated runoff resulting from land development and prescribes the construction of various swales, culverts, catch basins and detention ponds, as well as other water-handling facilities to channel and stage the release of rainwater to prevent downstream flooding.

The responsibility for maintaining these stormwater facilities is divided among homeowners, neighborhood associations, commercial property owners, the Township, and state authorities as follows:

Green infrastructure is water quality management techniques like green roofs, tree plantings, rain gardens, rain barrels and permeable pavement, that mimic natural hydrologic functions. Green Infrastructure has been proven to help solve major urban stormwater problems and improve the health and livability of neighborhoods. Cities and others have promoted these practices to commercial property owners as a way to improve stormwater management and, in some communities, reduce stormwater utility bills. But relatively little information has been publicized about the additional value that green infrastructure, when used on private property, can provide to commercial property owners and their tenants.

Benefits of Green Infrastructure for Private and Commercial Property Owners: 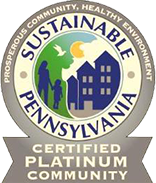